Brittany Smith is changing the way children learn about Diversity. The subject is  common in her pre-K class.

27-year-old Smith, a New Jersey native, has b=been teaching pre-k for nearly five years. Her classroom is  full of kids with a wide range of backgrounds that include at least four different languages.  She does her best to cater to the variety by stocking the classroom with multi-cultural costumes, toys and dolls.

When the world went into an uproar over the deaths of Breonna Taylor, Ahmaud Arbery, and George Floyd, she wanted to do something to help kids understand the depth of what is happening at this moment.

On June 1st, Smith who started out with 300 twitter followers, took to social media to share a list of children’s books that helps children deal with race and social issues.  The thread has garnered over 400,000 likes.

When asked about the post, Smith stated, “I felt like I hadn’t really seen much about how children are taking it, or about what people are doing for their children,” Smith told In The Know. “And as an educator myself, that’s something I’m always thinking about — especially given the fact that I teach in such a diverse community.”

Teacher in me had to do this..

210K people are talking about this
Her lengthy list includes books ranges from Black activism to systematic racism.  Some notables on the list include “A is for Activist” by  which is a rhyming story that discusses activism, environmental justice, civil rights, LGBTQ rights, and everything else that activists believe in and fight for. “Sulwe,” by Lupita Nyong which tells the amazing story of Sulwe who dreams of having bright skin like her mother and sister, but finds beauty in her uniqueness through a magical journey in the night sky.
She also included “Hair Love” by Matthew Cherry that tells the sweet story of a father dealing with fixing his young daughter’s hair. This book was later made into a short film by Sony pictures which became Oscar winning.

Smith drew inspiration for the viral tweet from the Nickelodeon network after they made a controversial decision to disrupt their programming for eight minutes and 46 seconds – the amount of time George Floyd was pinned and suffocated by police. The network dre criticism from some parents citing that the action was “too frightening for the children.” Smith decided that sharing this list would be her alternative.

Smith shared in an interview that some of the parents messaged her saying that they were struggling to find some of the titles on the list.  Thankfully, due to the response of the tweet, she has reportedly been receiving lots of children’s books as gifts to her class.

“So excited to add these to my library,” she tweeted about her new gifts.

Thank you so much Stephanie for the wonderful books! So excited to add these to my library. 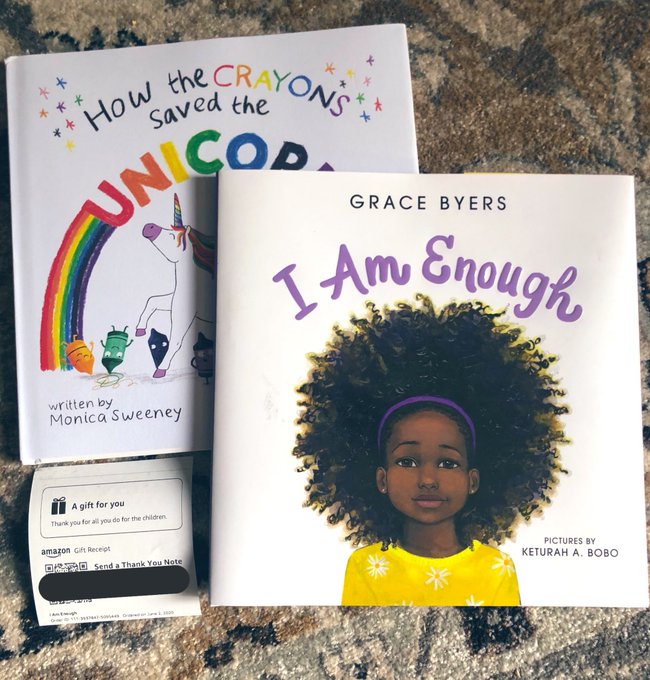 See Brittany’s other Tweets
Since Brittany’s tweet, she’s been featured in Time Magazine, PBS, and several news and media outlets.  She also revealed in a later tweet that she hopes to publish her own children’s book in 2021.
Tweet
Share13
Share
Pin
13 Shares

The Official Whitney Houston Biopic Is Coming To The Big Screen

Tia Mowry Encourages Women To Pour From Their Own Cup First

Book of The Month

The Black Kids is a brilliant period piece that tells the coming of age story of Ashley Bennett as she recounts the events that changed her world around her: The Rodney King Verdict.  Follow Ashley’s journey as she navigates her way through family turmoil and true colors of the people around her are revealed.